Freedom of the Body

FREEDOM OF THE BODY

FREEDOM OF THE BODY

It is the body which enables humans to interact with the outside world. The body carries the self and serves as a platform for exchange. Through the body we connect with other people. The body is part of woman / man as a socially interacting being. It serves as a mirror of education, society and culture. That is why it becomes our language and, therefore, can be read and interpreted symbolically. This cocoon, spun in the course of time, becomes an important and representative element of our soul, influenced by society.
What is its place and function in today’s society? Is it only being instrumentalised in this superficial society of ours? Which values remain? What sort
of attention does the body receive in contemporary art? What sort of role does it play there? Body as human shape; body as a means of interaction; body as an instrument. How far can we go, when using the body as an artistic / political medium?

A Walk on my bones // Manuel Vason & Kamil Guenatri (UK/Toulouse)

Manuel Vason and Kamil Guenatri met each other in London ( 2016 ). They had been corresponding through emails for a while until their meeting. The result is a series of three photoactions were made from basic materials including body, objects and specific spaces.
Guenatri’s and Vason’s common research aims also to create and experiment possible bridges between poetry and photography in the visual and writing frame. In this perspective, texts in the form of aphorisms have been written in order to establish a dialogue between images and words.
ongoing performance-poetry-photography

(Bio)
Manuel Vason is a visual activist interested to explore the correspondence between the art of photographing and the art of performing. Vason believes the space in between the action and the image is a fertile space of creative expansion. In 2016 Vason founded DARC, a collective of artists interested to explore the potentiality of creative documentation. In 2017 he started a PhD by publication at the UCA ( University for Creative Arts, UK ).

Kamil Guenatri was born in Algeria 1984, he lives and works in France. He studied engineering systems then in 2009, he joined Mirail University studio of poetry and performance art. Since 2010, he presents several performances, multimedia exhibitions, including The Regional Contemporary Art Fund – Les Abattoirs in Toulouse, the International Month of Performance Art in Berlin and others international festivals in Spain, England, Czech Republic, Poland, Colombia and USA.

Chapter 1: L’ordinaire – Patterns of behavior: A look onto the dichotomy of structuring and being structured at the same time We need structure
Are every-day actions free, informal movements, as they are carried out unconsciously or automatically? Or are they a form we are not aware of? In the video, the artist grandma’s body is limited by its age and its informal actions are no longer as automatic and natural. They have to be redesigned, reformalized. The video is in dialogue with a live performance by the artist, a younger woman, who is aiming to project the questioning of individual automatisms onto the notion of the presumed ‘free’ informality in living together.
inForm is part of the multidisciplinary film-project Livre d’Heures on the cohabitation of Suzan with her grandmother, exploring the communication between different generations, mindsets and structuring. Reaching out to go beyond structure, the project follows four main threads: We need structure. Structure is violent, we are violent. Structure is weak, we are weak. The ultimate structuring is ritualizing temporality.

(Bio)
Suzan Noesen is a multidisciplinary artist from and currently working in Luxembourg. She develops dramaturgical structures as a base for her projects in which she involves different forms such as drawing, painting, singing, performance and recently film. She accomplished Bachelor studies in Conceptual Art at KABK The Hague, complemented by courses in physical theatre and mime at AHK Amsterdam, as well as a Meisterschülerdegree in painting at HGB Leipzig. Aside her academic studies she spend several years living in intentional community structures where she learned about communication problems and methods. Her projects are experimental anthropological researches about the elementary question of how to live together, inspired by systemic, political and psychological references.

We take time each session to say the following mantra: I am perfect, I am strong, I am a woman, I can, I have, I will (Abigail Hagar)
The piece is an ongoing, absurd and grotesque attempt, to be the perfect, the ideal woman. Does she exist? The soundtrack is mostly textual. It forms a collage that compresses the past and present of female oppression and pathology, as it is documented in the mass media.
The body sculptures women’s shapes from small to large, from sexy to obnoxious. This is a chase after the ever changing, always demanding trends and fashions of the fragile definition of female beauty.

(Bio)
Shlomit is a freelance choreographer, performer, Researcher of improvisation and teacher. Lives, works and creates in Israel. Teaching and appearing with her works in Israel and around the world. She is Artistic director of ‘GVANIM’ Festival 2015 & 2017 in Suzanne Dellal Center, Tel Aviv. Artist director of the ‘Shlombal’ workshops for dance, improvisation and performance studies in Tel Aviv Israel. She has received a scholarship of a promising choreographer from the Culture Ministry of Israel; she holds a B.Ed. degree and physical theatre studies in the ‘Body Theatre School‘.

The Ambiguity of the Religious Body // Guy Marsan (Hamburg)
The Ambiguity of the Religious Body explores notions of body discipline and questions the freedom of the body. In many religions, the body is a temple that belongs to God. It is a holy project. But to break away from an indoctrinated system of values can create shame and guilt. The freedom of the body comes at a price. Using choreographic elements, movement, video projections, and a series of texts, I propose that freeing the body may not be as simple as one thinks because other social structures dictate how we live with the body. Leaving one belief system may amplify others.
A negotiation between the body and the surrounding structures must always take place.

(Bio)
Guy Marsan is a French-Canadian performer, actor, creator, based in Hamburg, Germany. After studying theatre in Canada, he studied physical theatre and mime corporel in Paris. In 2013, Guy received a grant from the Ontario Ministry of Culture to complete a Master of Arts in Performance Studies at the Universität Hamburg.
In the winter of 2015/16, Guy was artist in residence at the Fleetstreet Theater and in 2016, he won the Kunst Salon Choreography Prize in Cologne.

(Bio)
Sandy Artuso is a PhD candidate in the Department of German Studies at the University of Luxembourg, where she is writing her thesis about German autobiographies written by trans people. She is a member of the theatre collective Independent Little Lies.
She has worked as a journalist and co-edited a queer magazine called Die Preziöse.

Hirsto plays an eclectic selection of records, meandering between relaxing, flowing
ambient and dance music. Sounds for your head and your feet alike. 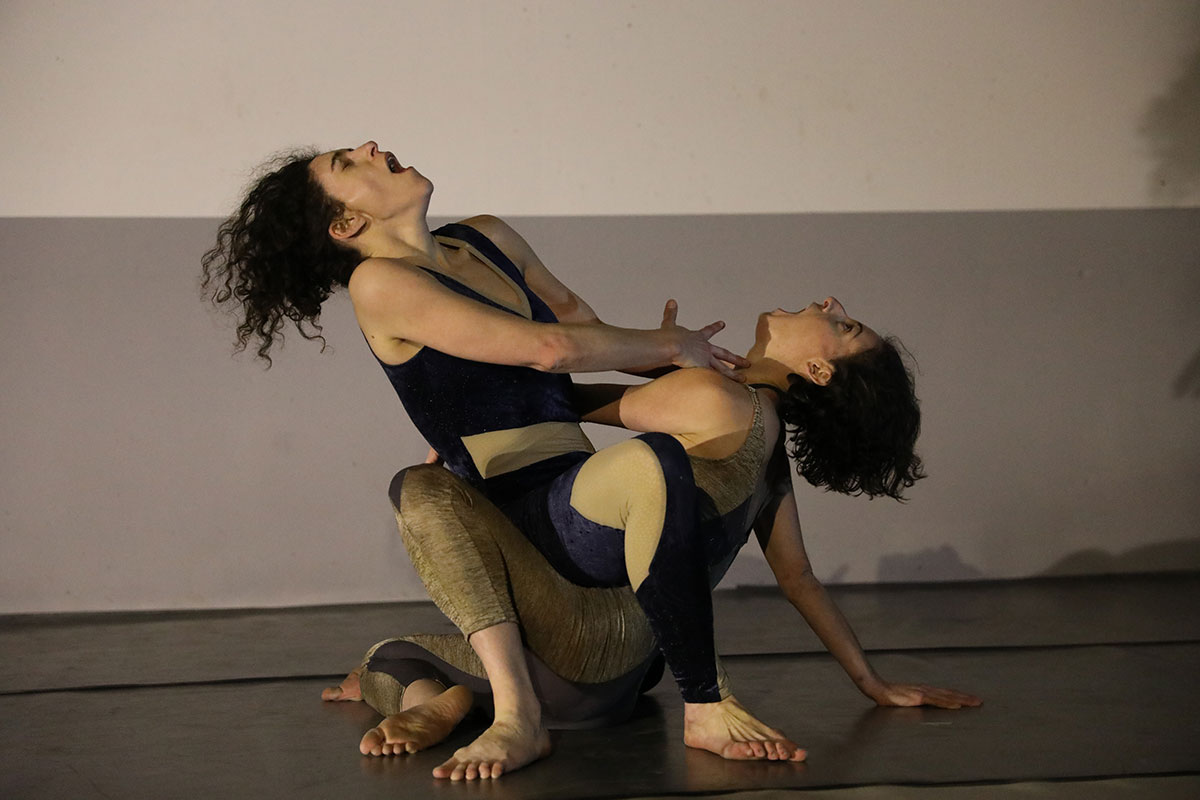 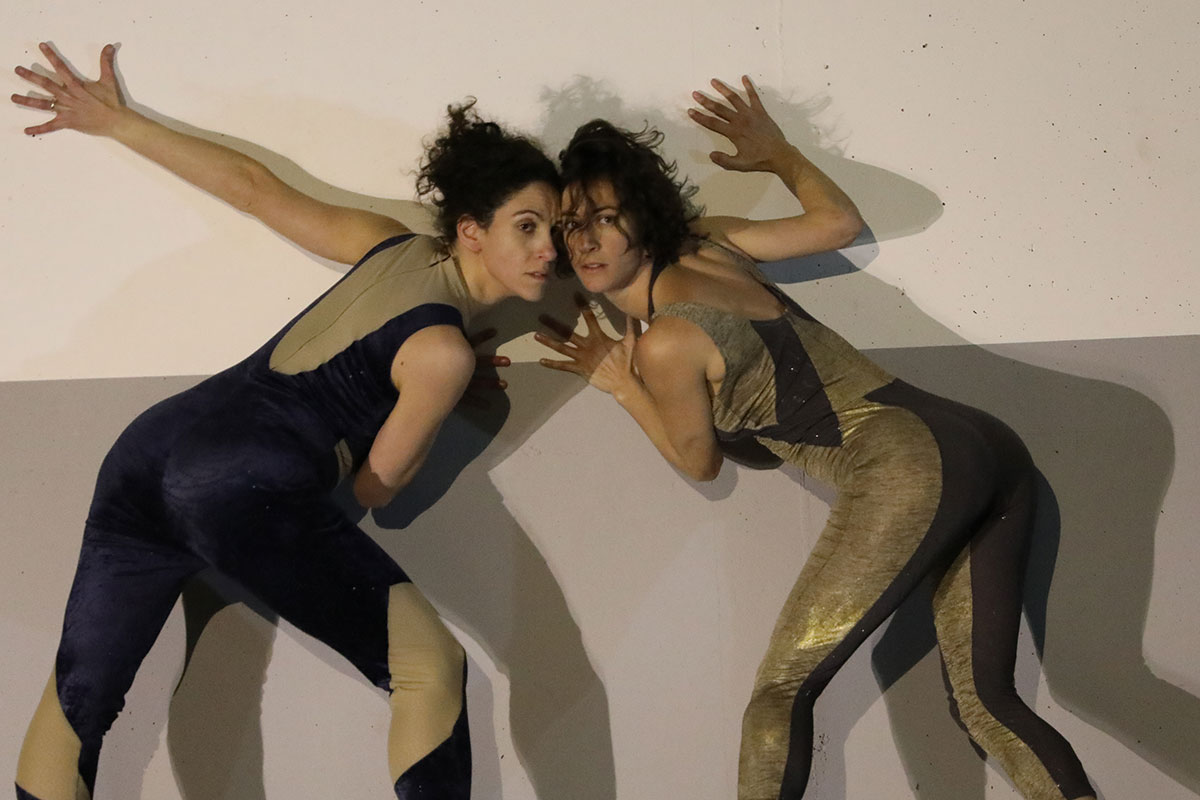 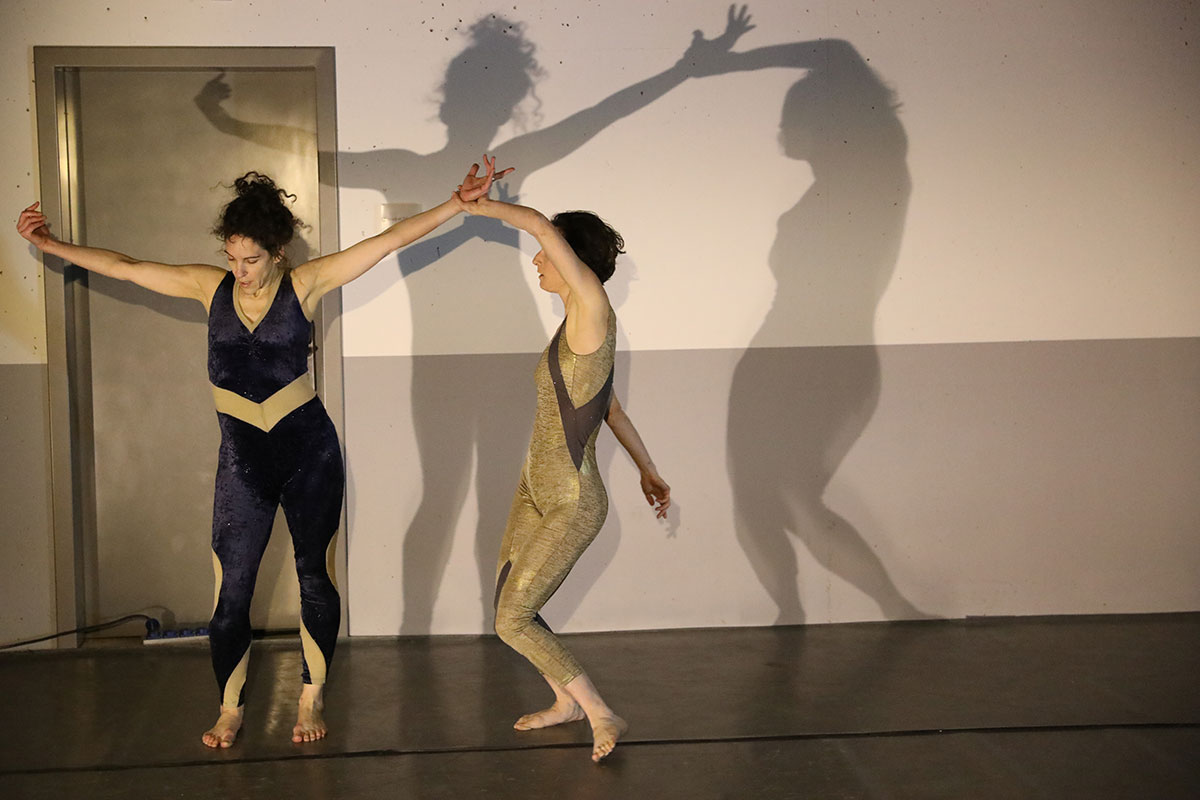 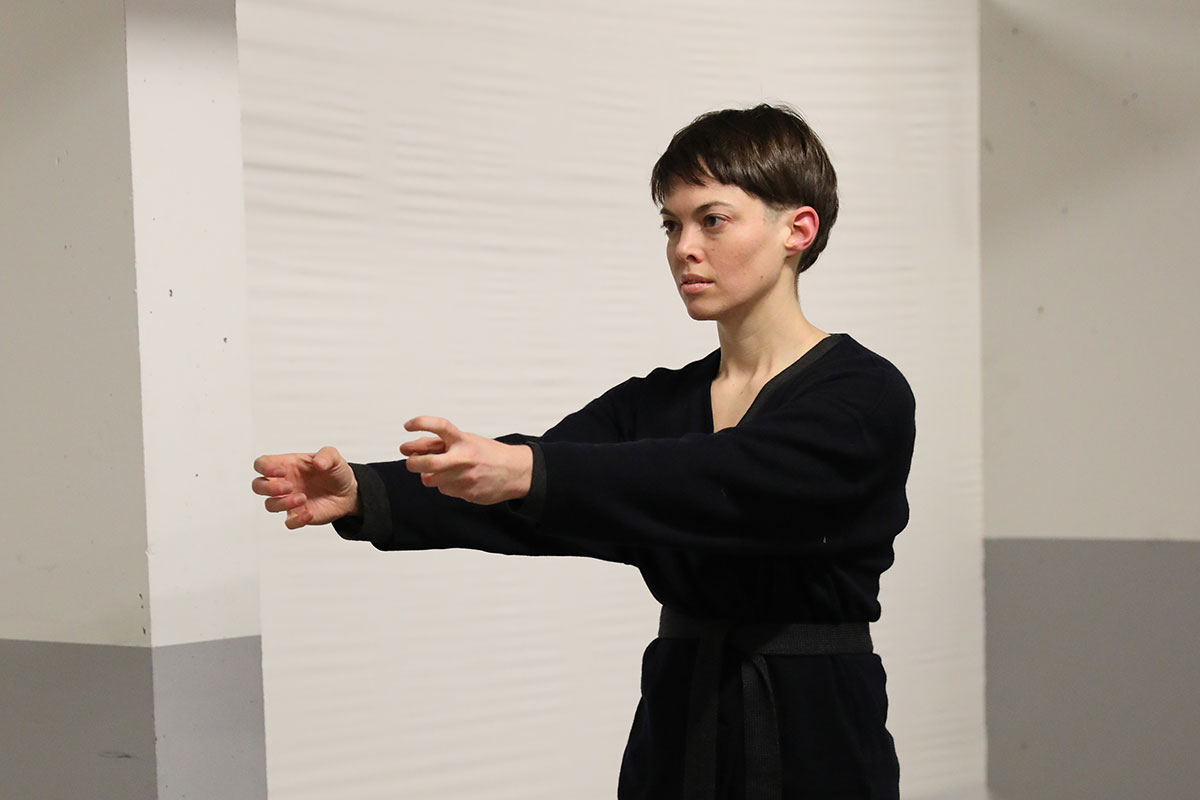 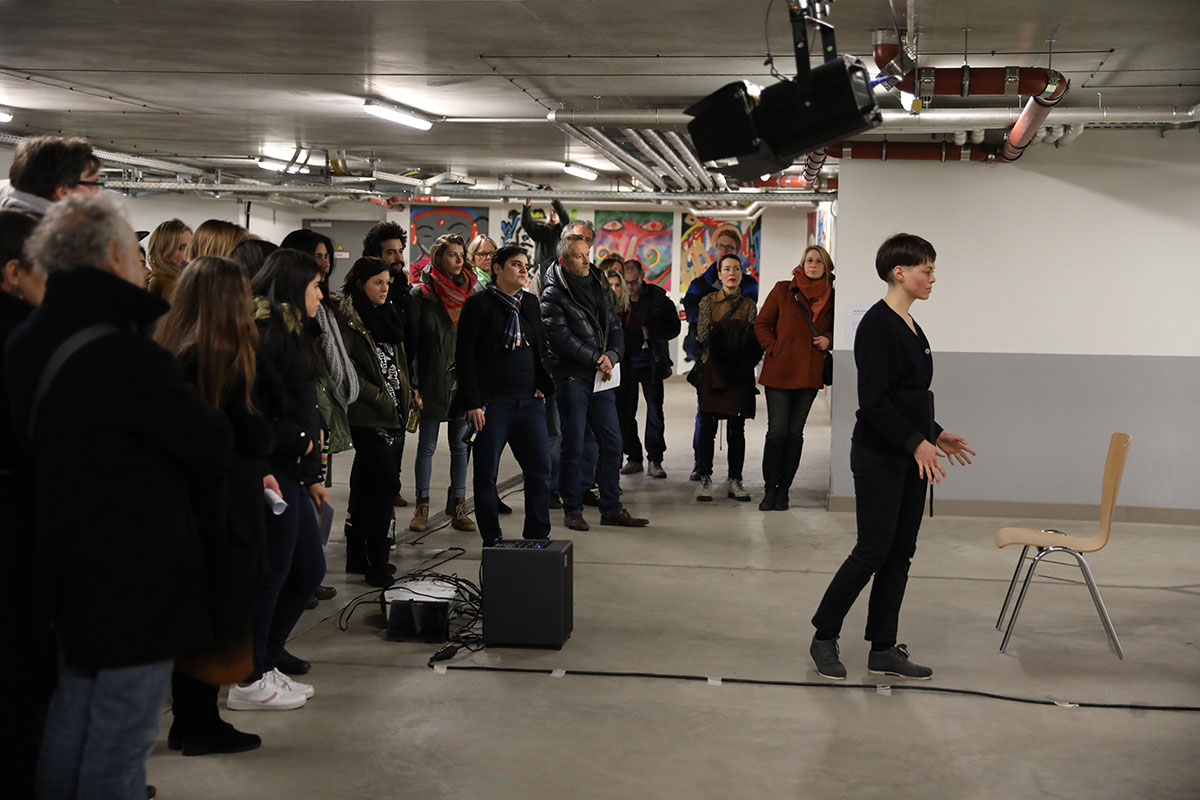 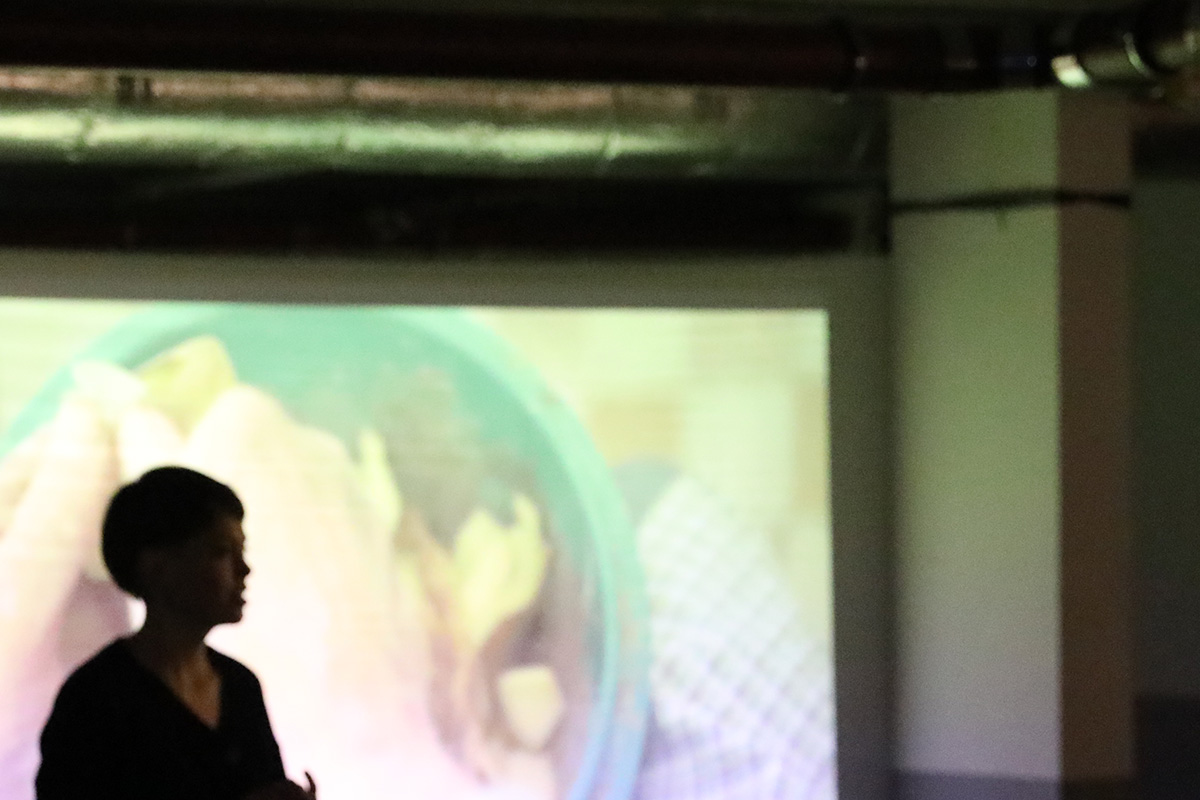 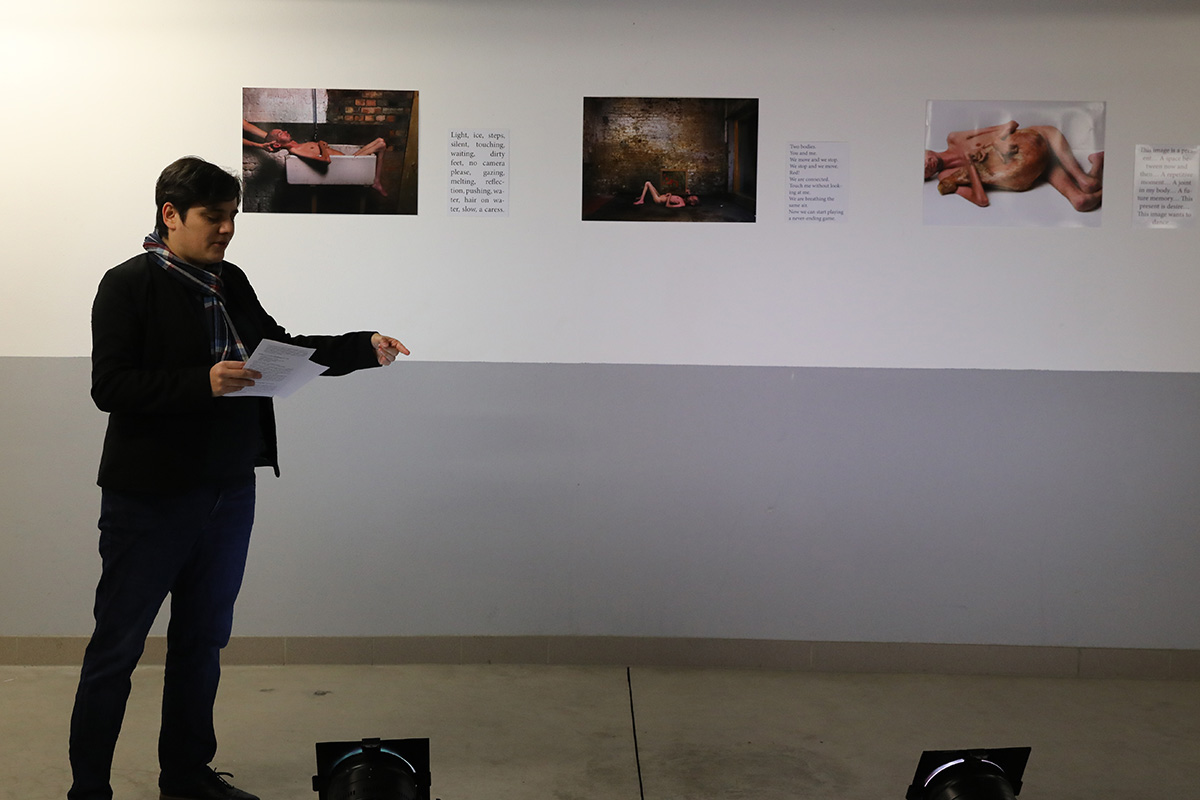 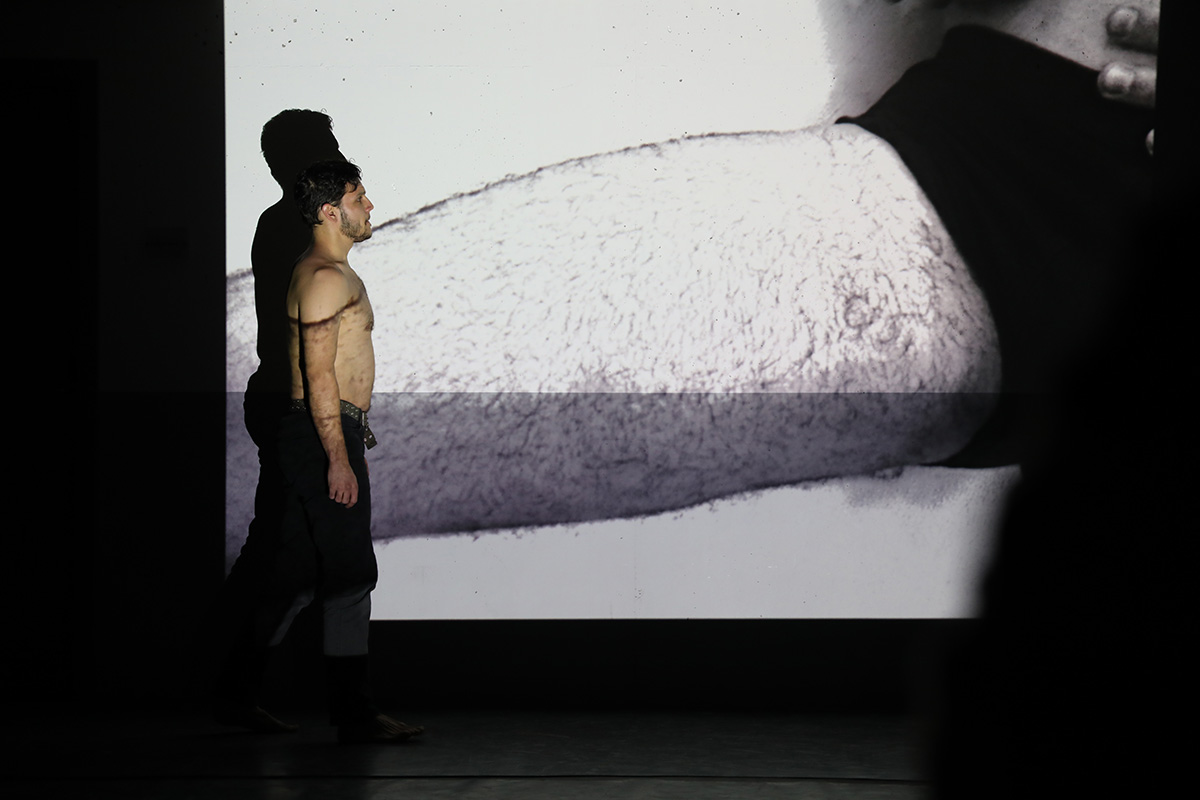 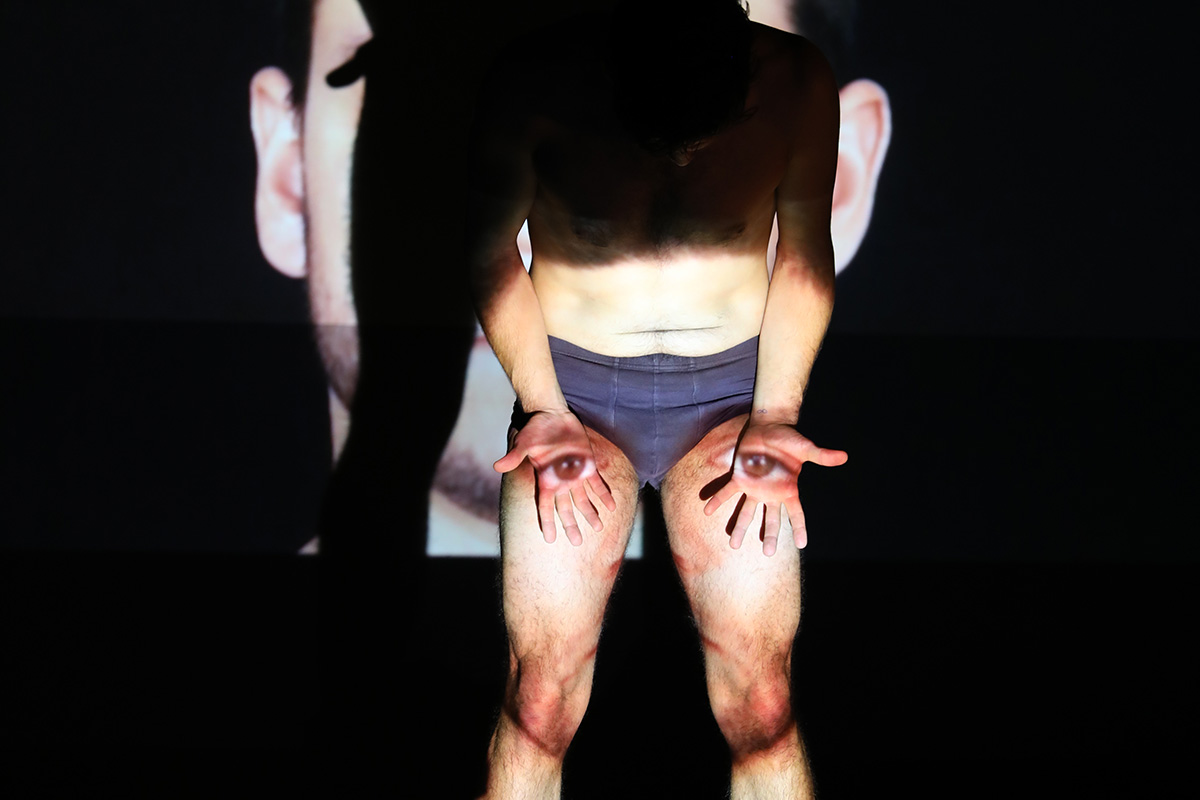 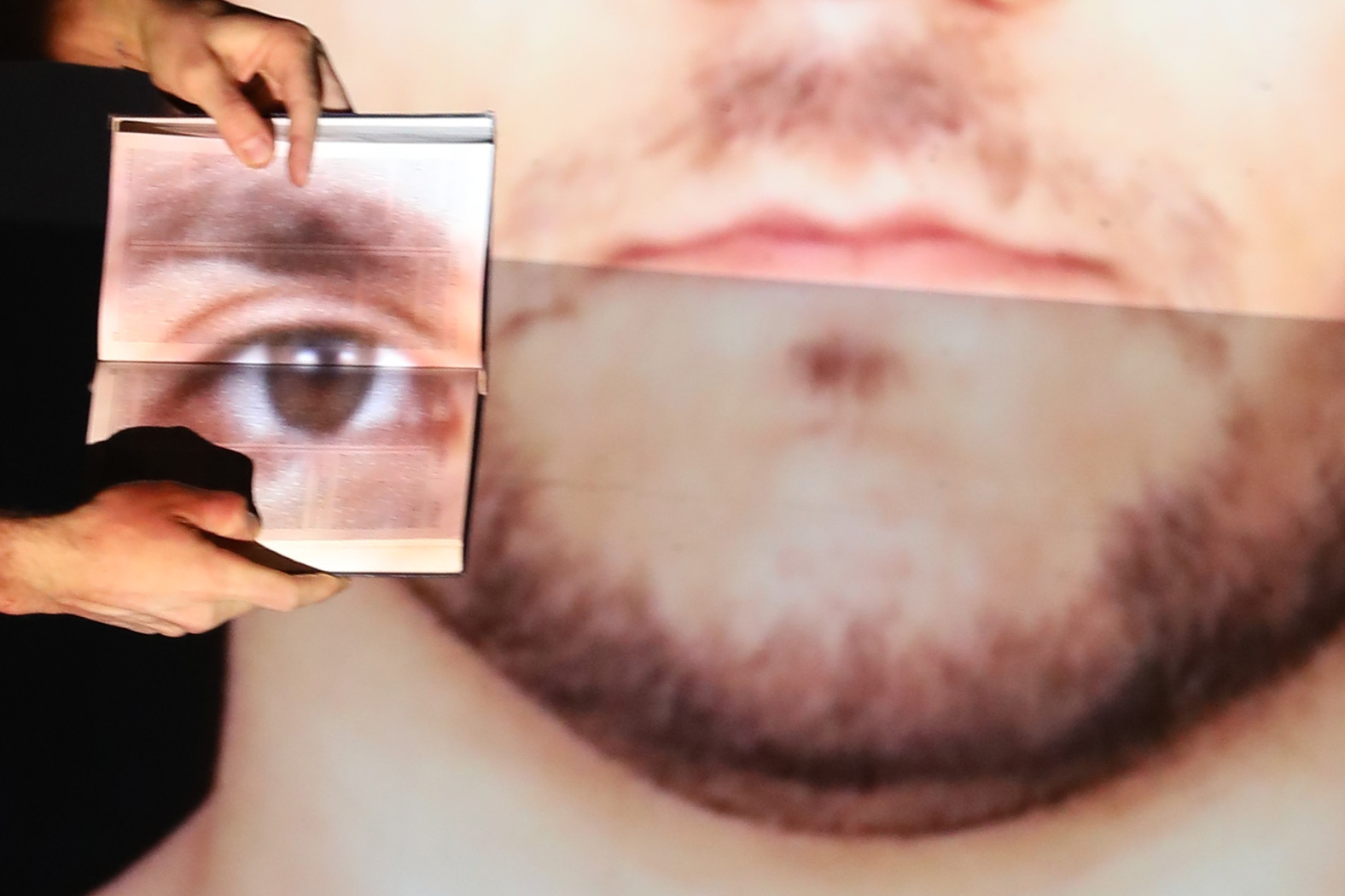 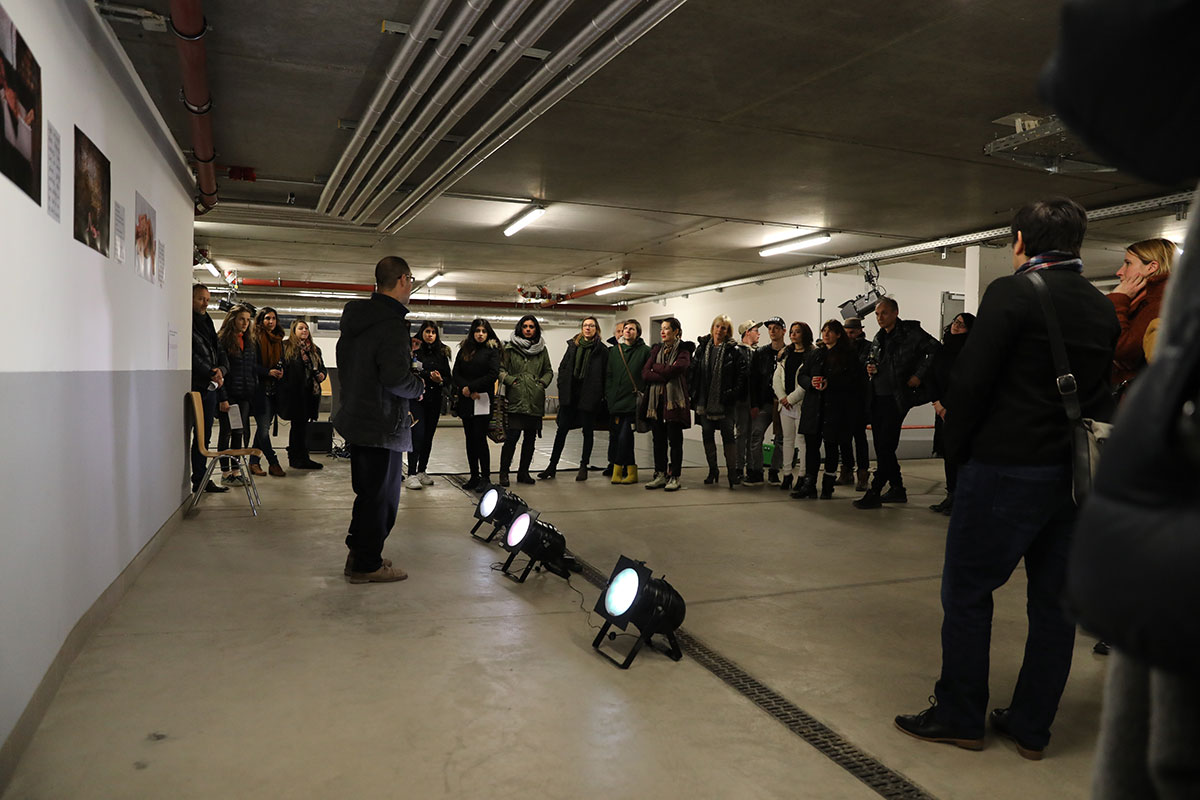 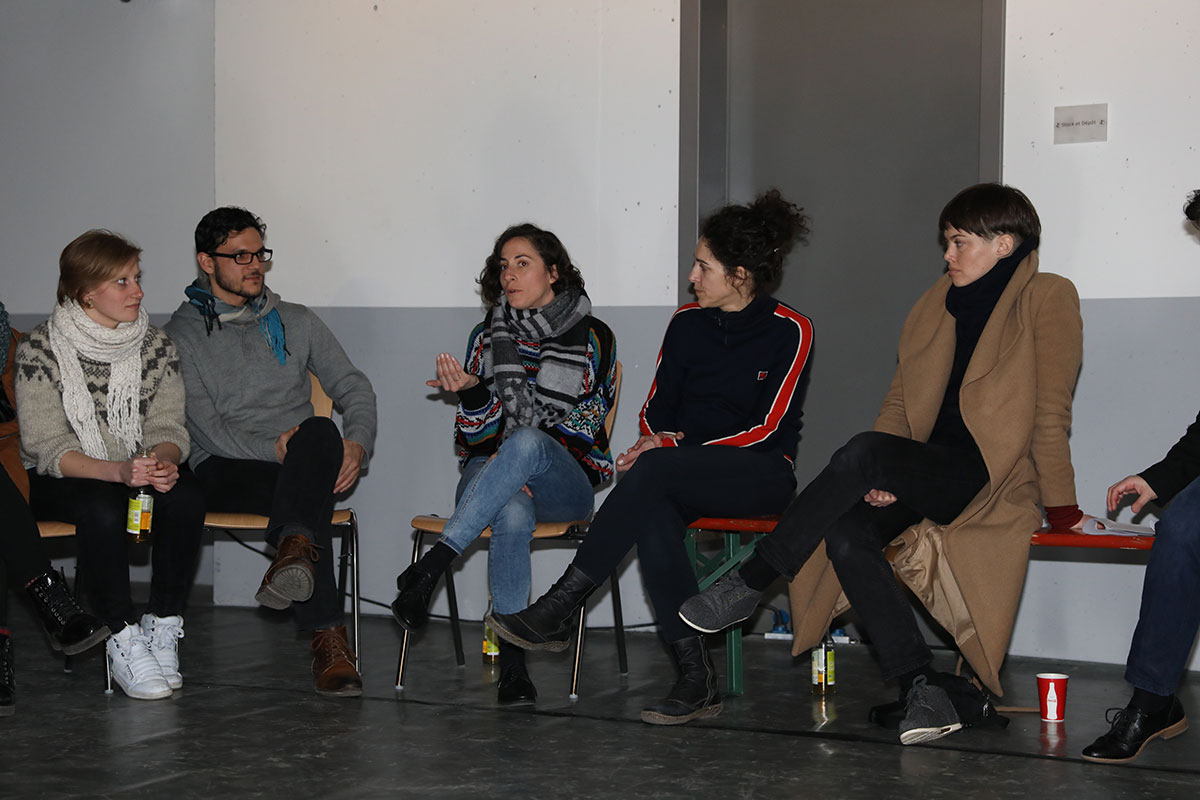 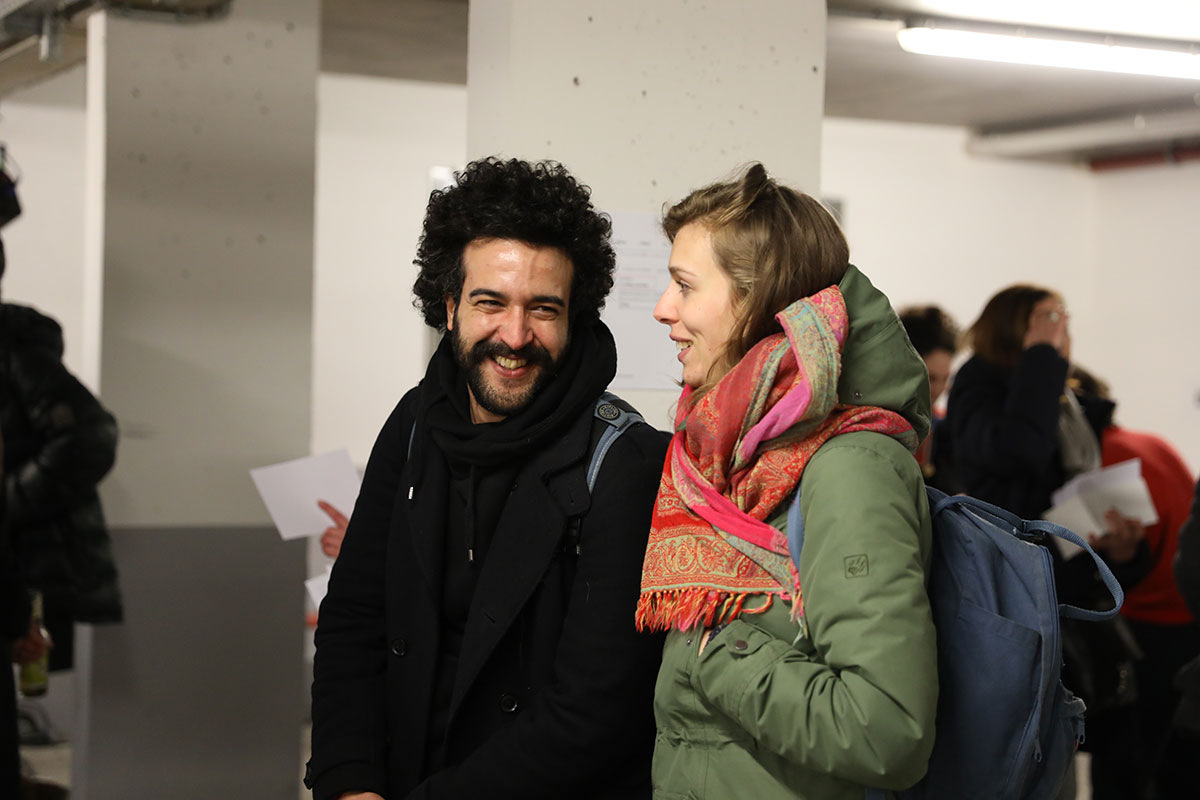 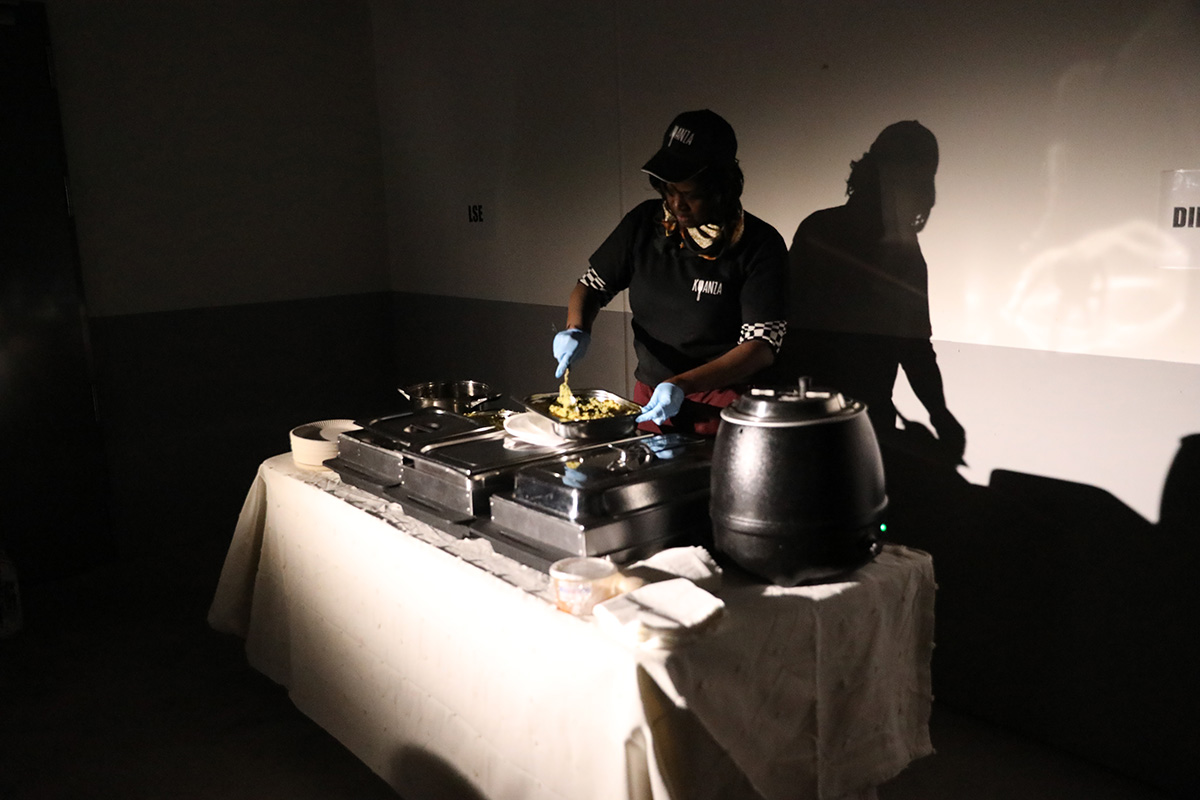